‘I’ve got it all… I’m doing my dream jobs, I have two gorgeous girls and a husband who I adore’: Abbey Clancy on family and the return of Britain’s Next Top Model

Like all good celebrities, Abbey Clancy knows how to make an entrance. She pads elegantly down an open staircase, in a skintight all-black outfit.

Her cartoonishly pretty eyes are feline green and you could ski down those cheekbones. But on closer inspection, all is not well.

‘I’m knackered and I look a state,’ she wails.

Although Abbey’s version of looking a state is somewhat different to mine or yours, behind the tinted moisturiser, her face is pale and there are dark circles under her eyes.

When we meet just before Christmas, the 29-year-old model and her husband, Stoke City footballer Peter Crouch, have been up for much of the night with their poorly six-month-old baby Liberty, having spent the earlier part of the evening at a Coldplay gig. 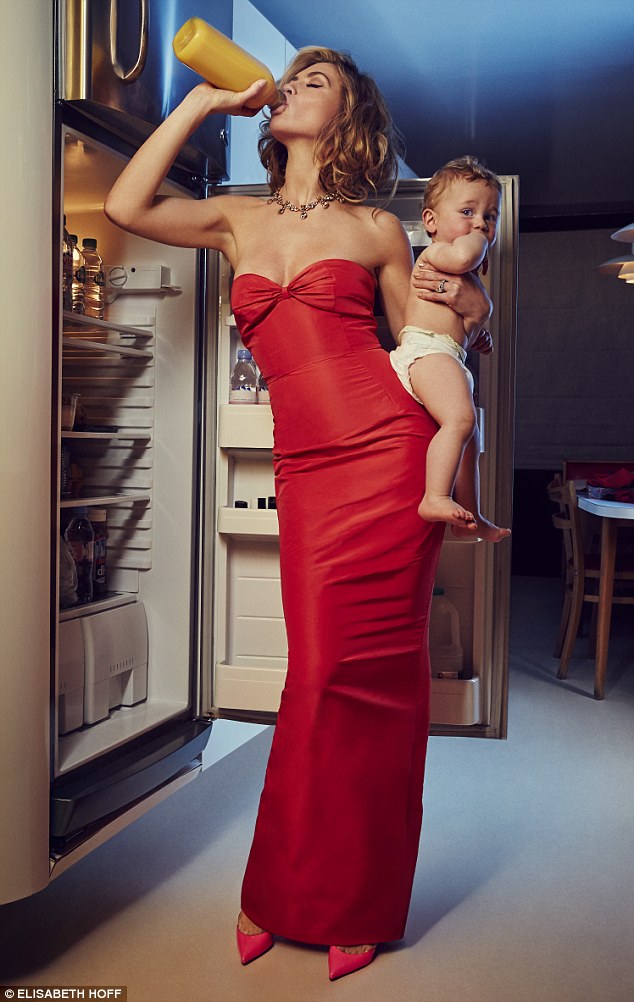 Abbey, who was back modelling lingerie just weeks after giving birth in June, is busy training for the Strictly Christmas Special (she won the competition in 2013), designing a clothing line for Matalan and filming her role as head judge for the new series of Britain’s Next Top Model, alongside male model Paul Sculfor, fashion writer Hilary Alexander and photographer Nicky Johnston.

It is a triumphant return for Abbey: the modelling reality show launched her career a decade ago when she came second to Lianna Fowler (no, us neither) in 2006.

She may not have won, but she has been the star of the series, now rebooted by Lifetime after Sky Living dropped it in 2013.

‘We have a fantastic group of 12 girls of all different shapes, sizes, ages and backgrounds.

‘Put any 12 girls in a house together and it’s going to cause drama. It’s very exciting,’ she says.

It’s hard to believe it has been nearly ten years since Abbey was a contestant – how does that make her feel?

‘Old!’ she smiles. ‘Here I am, almost 30 and married with two children, and these 18-year-olds are looking at me and thinking, “This is where it could all start.”’

As a judge, she says she’s no Simon Cowell – but it doesn’t sound as though she is a pushover either.

‘I’m mother hen but with no messing. I’m quite direct; [I give] constructive criticism.

‘Some of the girls are gorgeous but blow it by messing around: they moan about the clothes; they don’t like all the waiting around. They think you can just take a nice photo of yourself on your phone and be a model. But you need to be fit, healthy, strong, have stamina and work long hours.

‘I’m tougher than I thought I would be with the girls, but I want them to pay attention and do their best.

‘The show is a crash course in modelling and what I learned on it has stood me in good stead to this day.’

Alongside her various day jobs and the children, Abbey is moving house next week, from North London to Surrey.

She has no childcare for Liberty or four-year-old Sophia, beyond her mother, who travels down from Liverpool to help out. How does she juggle everything?

‘I don’t think I do,’ she sighs. ‘I think I’m borderline going mad now. I’ve reached my limit this week.

Working-mother guilt is an ongoing problem.

‘I beat myself up about it. When I was filming Next Top Model I had to go away for a whole week to Jamaica. I cried for the ten-hour flight,’ she says, before a small smile creeps across her lips.

‘But by day two I thought, “This is quite nice – not having to get up in the night, having no responsibilities.”’ 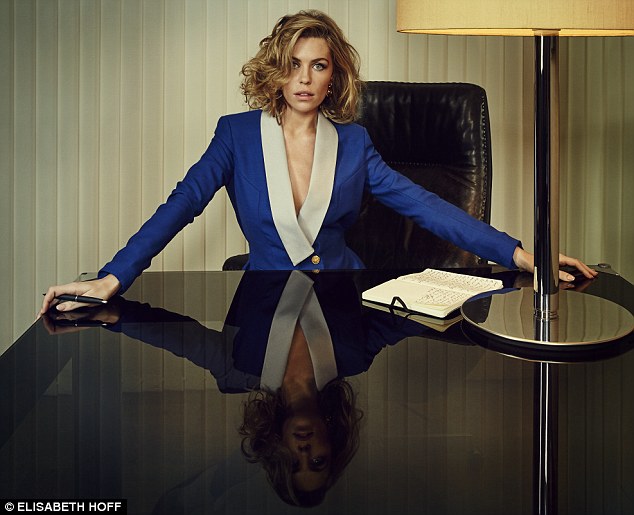 The appealing thing about Abbey is she’s very honest about the highs and lows of being a working mother of small children.

At the end of our interview, she is concerned she’s been too negative (‘You’ve caught me on a bad day’), but isn’t that just how working motherhood plays out, good days and bad? Brilliant bits and not so brilliant ones?

After snacking on a cheese toastie, green juice and coffee, Abbey visibly relaxes and rallies: ‘I do feel as though I’ve got it all. And I don’t mean materialistically.

‘I’m doing my dream jobs, I love being a mum and I have two gorgeous girls, an amazing family and close friends who support me, and a husband who I adore and who is incredible with the children.’

It is also a decade since she first met Peter in a bar – exactly ten years the day before our interview, in fact.

They know the date because it was the day he first scored for Liverpool. Did she just know he was the one from the start?

‘Yeah, we both did. He asked me to move in after a few weeks,’ she says, misty-eyed.

‘Although he did it by text which I wasn’t so happy about!’

Within weeks, 19-year-old Abbey was off to Germany as part of the England World Cup team’s Wag contingent, alongside Victoria Beckham and Cheryl Cole (as she was then), and plunged into a lion’s den of negative press.

Even now, she’s prickly when I mention the W-word, scolding me for bringing it up: ‘It’s absolutely ridiculous, just a silly name that people made up.

‘It was a frenzy, but we didn’t go around calling ourselves that.’

It must have helped her career, though?

‘It obviously helped me. It thrust me into the limelight more quickly,’ she says. ‘But I think I would have been successful anyway.’

You don’t have to work, do you? I venture.

‘Why not? Why wouldn’t I work?’ she demands, eyes blazing.

Because you’re married to a wealthy footballer.

‘And that’s great, but I like to work. It drives me, it makes me happy and I find it exciting meeting new people and spending time with adults.’

She credits Strictly with helping the public to see her in a different light.

‘It’s easy to judge. People have a certain view on footballers and what the girls who go out with them are like and it’s not very positive.

‘Going on Strictly was a good way for people to get to know me. With the job I do – having my photo taken – it’s not often they get to see what I’m really like.’

You can understand Abbey’s defensiveness when her motives towards Peter are questioned – an entire decade of it must get boring.

She seems genuinely besotted with the 34-year-old footballer, even in the midst of sleep-deprived parenthood.

‘It’s hard to make time for each other. We go to work, come home, make dinner, bathe the children and put them to bed, then we go to bed.

‘Then we’re up in the night with the baby. We’re knackered and snapping at each other.

‘But we remind each other that we’re just tired, we’ve got a new baby. I’m still so happy. We do things together and I think that’s important. We hang out together; we’re best friends.’

They’ve had wobbles over the years: Abbey was sent home from the 2006 World Cup after old photos of her snorting cocaine surfaced, and he allegedly cheated on her in 2010 while on a stag night in Spain. How does she navigate the hard times?

‘I don’t hold grudges. I fight and then let it go,’ she says.

And while their personalities are completely different, they share the same values: ‘We’re opposites – he couldn’t be any more laid back or he’d be asleep, and I’m…not! We both like having a laugh and we’re not driven by money and material things.’

Crucially, they don’t prioritise the children over their marriage – Abbey is no mummy martyr.

‘We’re still young. We like to go out and socialise – that’s what it’s all about. We work hard – everyone is allowed to let their hair down. Having children shouldn’t stop that.’

Their approach to parenting sounds eminently sensible: recognising that their children have been born into a life of privilege, they want them to have a normal upbringing: ‘I try not to spoil them. I’m conscious of them becoming spoilt brats – I couldn’t bear that.

‘It’s hard to completely keep them away from [privilege]: I’ve got a nice house, a nice car, we go on nice holidays. But I’d like them to work hard and know it doesn’t come easily.

‘Their dad has worked hard since he was a kid to be a top footballer and I’ve worked hard to have what I have.’

Born and raised in Liverpool, with a father who runs a tarmac company and a hairdresser mother who retrained as a college teacher, Abbey was academic, scoring a clutch of As in her GCSEs.

Yet she was always hellbent on being ‘a singer, dancer, model and actress – I was such a poseur’ and left school at 16 to join an ultimately unsuccessful girl band. How would she feel if her daughter did the same?

‘Well, education is power,’ she says. ‘I wish I had pursued the more academic side of myself.

‘I’d like to have studied languages. But then, I couldn’t sit in an office all day looking at a computer.’

Lots of young girls see her as an inspiration – does she see herself as a role model? There is a pause. 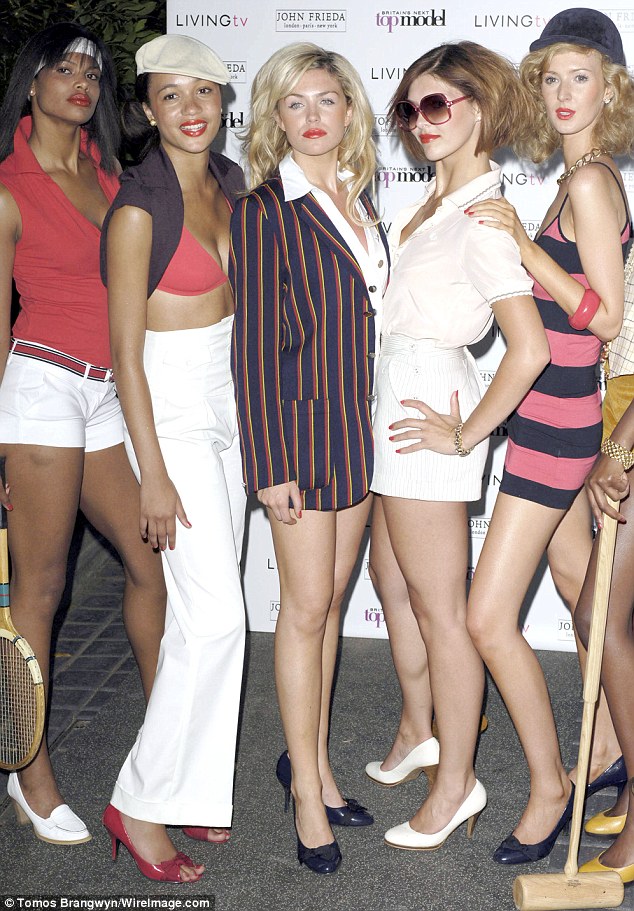 With fellow contestants on Britain’s Next Top Model, the series that launched Abbey’s career in 2006

‘No, I don’t. It’s hard because if you make a mistake and you’re seen as a role model… I don’t want to let people down.

‘Me, my husband and our friends like to go out, have a drink, be silly and have fun. If you’re perceived as a role model, it’s tricky.’

By the same token, she makes it clear that her incredible body is largely down to genetics and thus not something that everyone should aspire to.

She pinged back into shape weeks after giving birth, but she knows that’s not the case for most women.

‘You can’t compare yourself to anyone else because you’re never going to be that person.

‘You’ve got to try to work with what you’ve got. I’m getting slimmer as I get older – I had a fatter face and bigger boobs when I was younger. It was the same for my mum and I’m a mirror image of her.

‘Also, I don’t stop – I just don’t sit down and I’m married to a professional athlete so we try to eat well.

‘Sometimes I feel great [about the way I look], sometimes not so good. You are what you are and you have to try somehow to be confident.’

So what does 2016 hold for Abbey? She turns 30 today and, when we spoke in December, was hankering after a fancy-dress party to celebrate. (Ideal theme: musicians. She and Peter are indie-rock fans and keen gig-goers. Favourites include their friends Kasabian, Foals and Abbey’s brother John’s up-and-coming band Judas.)

Unfortunately, her loved ones aren’t keen on dressing up: ‘Everyone is a bit too cool for school,’ she says, with an eye-roll.

As for her career, Abbey has no game plan, preferring to ‘go with the flow’.

She’s got a new house to turn into a home – lots of extended family roast dinners and glasses of wine around her new dining table will help.

After years of moving around the country for Peter’s job, Abbey is looking forward to putting down proper roots. Now the family will stay put, while he commutes to Stoke.

‘It gets to the point where you need a base, a proper home, near where your children will go to school.’

And she’d love to have another baby, sleepless nights notwithstanding.

As for the long term, how does she picture herself and Peter growing old together? Side-by-side on deckchairs by the seaside, maybe?

‘No,’ she chuckles, ‘I see us dancing on a table with our walking sticks.’

She might be shattered, but the girl just wants to have fun.